Tiki King || Notes on the History of the Baritone Ukulele 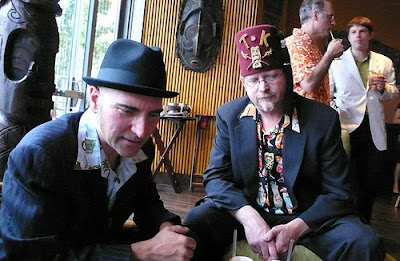 Tiki King (right) Comtemplates with Otto (left)
mini jen's Flickr
http://www.flickr.com/photos/20223456@N00/3494411992/
I had a conversation during the November 2010 Ukulele Club of Santa Cruz meeting with Tiki King. I told him about this blog and how much I was finding on the Baritone Ukulele. He told me that he had done some research on the history of the Baritone Ukulele but never obtained enough information to come to a definitive solution. Below is a copy of his (preliminary & unfinished) research that he agreed to share with us...
I would also like to note that Tiki King has been active in the ukulele community. He is a performer, luthier, and artist. I believe he is the creator of all of the Flea and Fluke designs for Jim Beloff of Flea Market Music. I have two of his CD's, a couple of Tiki necklaces that I purchased from past Northern California Ukulele Festivals in Hayward, California. Now, he has a new brick & mortar-type store in Felton, California, called: Ukuleles of Felton.
The Tiki King occupies a very high place in the Top 50 Ukulele Sites, at number 18, and you can visit his site here, Tiki King. Here is the article he had started on the Baritone...
“Proof is simply finding enough people who agree with you” Anonymous
Things are being invented all the time. Some will go on to fame and popularity, some will not. Some will be patented, trademarked and copywriten, and, some will not. But one thing is certain. At some point someone will say, “you know, (insert name here) was the one who really invented that” And so it goes. With very few exceptions we can never really know who “invented” anything, only who was the first to document it, and even then the debate will rage. So it is with the Baritone Ukulele. We have, for the most part accepted that the “Ukulele” was born in following the arrival of the Ravenscraig in 1879. “but wait” some my say, ”there are photographs of people holding Ukuleles that predate the Ravenscraig.” Well, that depends on how you look at it. There are indeed photographs of people holding small four string instruments, such as braginas or machetes, which are similar, but what we call the Ukulele was a modification to these instruments.
So in my opinion, it was not a Ukulele until it became the Ukulele, and that was some time after 1879. Once again it comes down to documentation. If there is no recorded mention of the Ukulele before 1879, then we must assume it did not exist.
I have endeavored to find documentation of the the birth of the Baritone Ukulele, and it has been a difficult task. By all accounts I can find no mention of the Baritone that predates 1948. There have been several documents, letters, etc, from the early fifties that mention the introduction of the baritone “some years ago” or “some years back.” I found one hand invoice for a baritone that was dated 1964 and said “fifteen years old.” I have found many mentions of a “Guitar-Uke” as well as a “Uke-I-Tar.” Such as in the book “EZ Method for Ukulele and Ukulele Banjo: Self Instruction and Teachers Use: Ukulele: Tiple, Uke-I-Tar, Guitar-Uke, and Taropatch” which was Published by Wm J Smith Music Co., Inc. c. 1924.
So does this mean that there was a baritone type instrument as far back as the mid 20’s? Possibly, but I doubt it. I think it was more a case of capitalizing on the popularity of the Ukulele by adding the “Uke” prefix to a tenor or parlor guitar.
There are generally two camps when it comes to the who invented the Baritone. Those who believe that it was Herk Favilla, and those who believe it was Arthur Godfrey. Both can be traced back to the same period, but certainly one was indeed first. So, how do we prove who was the father of the Baritone? What it boils down to is Documentation. I have always assumed that the Favillas rightfully held claim to the title, but to be honest, never sought any proof. I have had correspondence with Tom Favilla, who was the last to build the Favilla instruments, and his story seemed to make sense. According to Tom, 'The idea of the Baritone uke was my fathers for his young guitar students, and was first built as custom models by his father (my grandfather John in the late 1940's).' It first appeared in a Favilla price list as a regular part of the Favilla line in 1948 or 1949... Herk Favilla wrote 'the Baritone ukulele method' in 1949 (published 1950), Second printing 1951. This information is backed up by the library of congress." So, if he wrote a book in 1949 it would seem to place the Baritone in Favilla’s hands at least then.
On to Arthur Godfrey. Arthur Godfrey was an avid musician, and star of Radio and Television in the late 40’s 50’s. and 60’s. He had several shows, such as “Arthur Godfrey’s Talent scouts”, (1948 to 1958) “Arthur Godfrey and his friends” which ran from 1949 to 1957 There was also a short lived show called “Arthur Godfrey and his Ukulele” which was only on the air from April to June of 1950
Eddie Connors, credited by some as the original designer of the baritone ukulele. There was also the Vega line. such as the "Classic Lute" and "Solo Lute" made for Godfrey around 1961. Interesting note. On the soundhole lable on a vega deluxe "classic lute" baritone, I found the patent numbers 2,460,443 and 2,468,374. 2,460,443 is the patent number for a photographic enlarger, and 2,468,374 is for a hollow body arch-top electric guitar patented by vega in 1949.
I did find an ad for a Vega baritone which read: Vega baritone uke, 1950, EXF, formerly owned by Eddie Connors, the original designer of the baritone ukulele, #1 handwritten on label, comes with 1950 newspaper clip of Connors with this uke. This would seem to mean that the first baritone built by Vega was in 1950.
Thanks Tiki King!
Posted by HumbleUker at 12:02 PM

Simply elegant playing! This is a beautiful tune crisply played. I would not miss this video. I listened to it over and over.

MY BLOGS (except CHORDS)

Send your ideas to humbleuker@gmail.com